How Beacons Are Changing the Shopping Experience

Beacons are taking the world of mobile by storm. They are low-powered radio transmitters that can send signals to smartphones that enter their immediate vicinity, via Bluetooth Low Energy technology.  In the months and years to come, we’ll see beaconing applied in all kinds of valuable ways.

For marketers in particular, beacons are important because they allow more precise targeting of customers in a locale. A customer approaching a jewelry counter in a department store, for example, can receive a message from a battery-powered beacon installed there, offering information or a promotion that relates specifically to merchandise displayed there. In a different department of the same store, another beacon transmits a different message. Before beacons, marketers could use geofencing technology, so that a message, advertisement, or coupon could be sent to consumers when they were within a certain range of a geofenced area, such as within a one-block radius of a store. However, that technology typically relies on GPS tracking, which only works well outside the store. With beaconing, marketers can lead and direct customers to specific areas and products within a store or mall.

As a point of technical accuracy, the beacon itself does not really contain messaging; rather it sends a unique code that can be read only by certain mobile apps. Thus, the carrier of the smartphone has to have installed an app – and if he or she has not done so, no message will arrive. The choice to opt-out exists at any time. But the key to beaconing’s effectiveness is that the app does not actually have to be running to be awakened by the beacon signal.

Think about it, and you realize that beaconing has been the missing piece in the whole mobile-shopping puzzle. The technology is essentially invisible and can work without the mobile consumer’s having to do anything – usually a major hurdle for any mobile shopping technology. The shopper only has to agree in advance to receive such messages as they shop.

So imagine walking by or into a store and receiving a text message triggered by a beacon at the store entrance. It alerts you that mobile shoppers are eligible for certain deals, which you can receive if you want. Assuming you accept, you begin receiving highly relevant messaging in the form of well-crafted, full-screen images based on what department or aisle you are strolling through at the moment. Here’s an example: 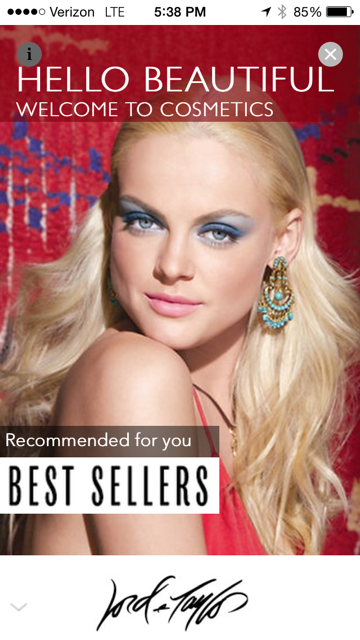 Implementing beaconing is less about installing the actual beacons and much more about rethinking the overall shopping experience they can help shape. Since the best way to imagine the possibilities is through actual, small-scale deployments, this has been how many retailers have spent the past several months, quietly experimenting and learning. Now, many are ready to scale up their initiatives, and beacons are bursting onto the scene in a big way. For various purposes, they are being used by retailers such as Timberland, Kenneth Cole, and Alex and Ani, hoteliers such as Marriott, and a variety of sports stadiums. Here are some details from a handful of companies – each by the way running on a different beacon platform:

That’s a lot of activity to report, but the truth is that it only constitutes a vanguard. Most shoppers have yet to be beaconed; many will encounter the technology before the end of this year. How long will it be until it’s hard to find someone who is not familiar with beaconing? How long till it’s hard to remember a time when the marketing messages you encountered had nothing to do with where you were? I would guess, not long at all.

Chuck Martin is CEO of Mobile Future Institute and Editor of the MediaPost mCommerce Daily. His latest book is Mobile Influence: The New Power of the Consumer. Follow him on Twitter at @chuckmartin.