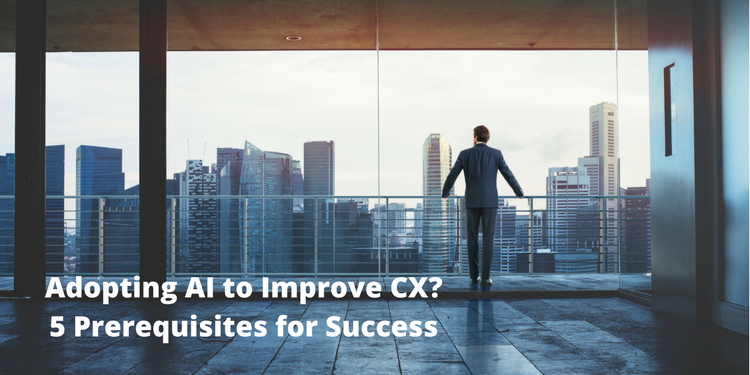 AI-driven applications are hot and getting hotter. Forrester’s 2018 survey respondents who said they are investing in AI increased from 40% in 2016 to 51% in 2017.  The McKinsey Global Institute estimates that in comparison with the Industrial Revolution, AI’s disruption of society and business is happening at 300 times the scale and ten times faster. Research done by the Boston Consulting Group and MIT Sloan reveals large gaps between leaders and laggards in every industry regarding AI usage, and predict that the gaps will magnify over the next five years.

The possibilities and potential for AI-driven applications to enhance Customer Experience (CX) seem endless, but if you’re thinking of jumping on board as soon as possible, think again.

END_OF_DOCUMENT_TOKEN_TO_BE_REPLACED

From training diverse workforces to understand each other to putting product designers in the shoes of their customers, VR is poised to be far more than just a game.

Researchers at Stanford are running “virtual shoes” experiments in which people “viscerally embody avatars” that encounter various forms of prejudice, based on age, race, economic status, and disabilities. Then, subjects are tested for changes in empathy levels toward these groups. After positive initial results, the team is now partnering with neuroscientists to demonstrate how these experiences–which they quite clinically call “self-other merging”–can physically change the brain to reduce bias.

Social innovators are tapping into VR to deepen citizens’ identification with disadvantaged people and places. After screening its documentary on a 12-year-old refugee in Jordan, Clouds over Sidra, in 360-degree video, UNICEF more than doubled its annual fundraising haul. Pencils of Promise, which builds schools for children without access to them, used the same technology to show what learning feels like before and after access to a decent learning environment. More recently, an immersive experience called Notes on Blindness stole the show at the Tribeca Film Festival, by putting the “audience” in the mind’s eye of someone who is blind. 3D sound was the star here, showing that VR’s power transcends fancy visuals.

But empathy-driven VR isn’t just for advocates and academics, it has value for business, too.